The risk of ignoring risk

On a visit to the Smithsonian Institution’s Museum of American History in Washington, D.C., I spied a not-very-obvious display case along a corridor off the main hall. In it were a few amazing items, at least amazing for this techno geek, the most compelling being the original Apple I computer, the first laser and the first digital camera.

Thinking about these earthshaking innovations, they did not seem to be such when their inventors created them. The Apple I was seen as a hobbyist device. The laser was a hard science laboratory creation, not a commercial technology. The digital camera was a young engineer’s attempt to make use of new charge coupling device (CCD) technology.

Of course, we know that the Apple I was the seed from which the world’s largest corporation grew over 35 years. The laser sprang from the laboratory to be a critical technology for medical applications, welding and cutting, surveying, communications, printing, CDs and optical discs, spectroscopy, heat treatment, barcode scanning and more. And from its creation in 1975 the digital camera has made everyone a photographer, first through separate filmless cameras and now through cell phone cameras.

KODAK OWNED THE RIGHTS TO A GREAT FUTURE

What is startling is that the engineer who invented the digital camera worked for the giant of photography, Kodak. Kodak owned the patent for what the engineer invented. Yet, Kodak proceeded to bury the technology rather than commercialize it. Had it instead adopted the technology on a timely basis, today it could be the Apple of digital imaging. The New York TImes’ Lens blog offers a great summary of the invention of the digital camera and Kodak’s failure to embrace it.

The attitude at Kodak was that no one needed digital photos. Film and photos printed on paper, using silver halide technology, had ruled for 100 years and Kodak ruled film and paper.photography.

How wrong was that conclusion! Evidence was ignored as digital photography caught hold. Biases reined at Kodak, likely including:

Superiority bias – “Kodak is the king of photography and we know best!”.

Confirmation bias – Evidence that threatened the view that film and paper would continue to rule was ignored and discounted.

Sunk cost effect – The company was committed to film and paper because of deep past investment rather than future prospects.

Default option – Moving away from film and paper would be the difficult course of action.

Familiarity heuristic – “Film and paper photography are what we do at Kodak!”

Functional fixedness – “Real photography is about film and paper, not electrons!”

Future blindness – Along the way, the trend to digital was increasingly visible, but Kodak’s strategists continued to ignore and discount it.

Group polarization effect – Kodak’s leaders reinforced one another’s view that film and paper were the right path for Kodak.

Illusion of control –  Kodak felt that it’s supreme market position in film and paper enabled it to continue to control the direction of the market.

Inattention blindness. The company’s “tight” definition of what constituted the photography market tended to blind its leaders to digital’s threat.

Ingroup bias – “We at Kodak know better because we are better!”

Loss avoidance – “‘Sticking to our knitting’ – film and paper photography – seems less risky than changing the company’s direction and committing to an unknown digital future.”

Narrative fallacy – “Our story, of leading the growth of photography, is just beginning.”

Narrow framing – “If the choice is film-and-paper photography or digital photography, why would we undermine our current business by choosing digital?”

Optimism bias – “We have always led the photography market and, of course, we will continue to do so.”

Risk blindness – Being on the top of the current market caused Kodak’s leaders not to see the risk posed by the “outlier” of digital photography and the adverse effect it posed to Kodak’s dominance and even its future existence.

Risk is something that in many ways we recognize in our society and try to control for. For example, traffic engineers and safety experts build careers on making roads and vehicles safer and reducing the chance of accidents. We carry insurance to address the risks of fire and theft. When it is dark and unfamiliar, our senses are heightened and we try to avoid danger.

Indeed, risk awareness and risk avoidance are built in to the fabric of our personal and professional lives.

Why is it, then, that, like Kodak, a large majority of organizations appear to ignore formally addressing risk when making their all-important strategic decisions? Are the threats too abstract to consider? Do we get lulled by past success and current “business as usual”? Are we so disconnected from the external environment that we don’t spot what will harm us sooner or later?

We like to think that the leaders, strategists and decision makers who guide and control business, government and the non-profit sector are on top of their organizations and the future. Yet, the results of our 2016 Strategic Leader Survey, which focuses on decision making, show a general inattention to strategic risk by organizational leaders. 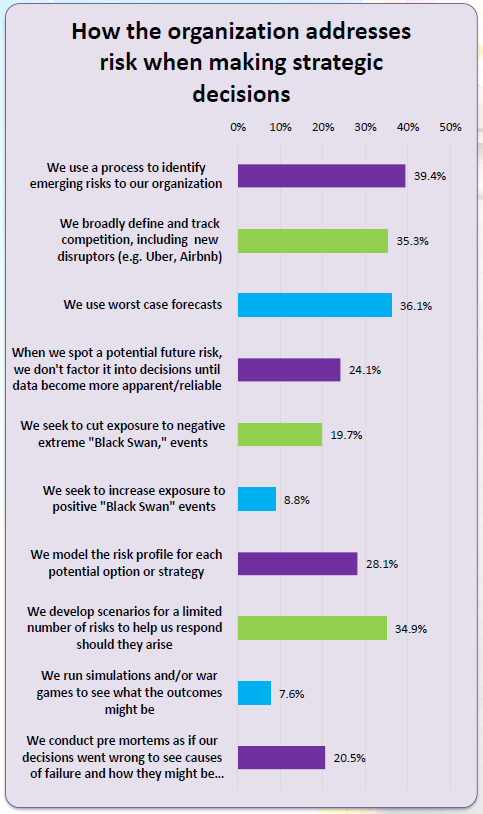 As the chart of survey results shows:

THE RISK OF NOT ACTING

What’s very apparent in the Kodak story and the stories of other “leading organizations” that have fallen into similar traps (e.g. BP ignoring the risks of its Gulf of Mexico oil well exploding and Sears and other department store retailers continuing to be saddled with store networks as mall sales keep falling) is that a premium is put on protecting the status quo versus changing strategies to capitalize on change or at least to avoid its worst consequences.

Being averse to changing the organization’s strategic focus is understandable: After all, prior strategies led to success. But assuming the necessary conditions that enabled the organization to be so successful in the past will continue to hold is to exhibit great hubris. It is so human to fall prey to the “forever changeless trap” in which we think of the current condition as being the same forever – especially when the current condition is what has made us so successful!

The 2016 Strategic Leader Survey also looked at how organizations of varying levels of success, size and type address risk.

Non-profits appear to be slightly more likely to use worst-case forecasts (33% versus 28%).

THE CALL FOR STRATEGIC RISK MANAGEMENT

Despire these differences by level of success, size and type, the key finding is the underlying reality that only a minority of organizations take important steps to address risk in strategic decision making.

The stark reality that took down Kodak is that strategic risk can thwart an organization’s ability to achieve its vision. Strategic choices carry risks that can not only block achievement of objectives but can harm the entire organization. This reality calls for organizations to do much more than most appear to be doing to pursue strategic risk management: Understanding the risk exposure – the likelihood of harm or loss and its magnitude – created when choosing and implementing strategies and taking steps to reduce this exposure.